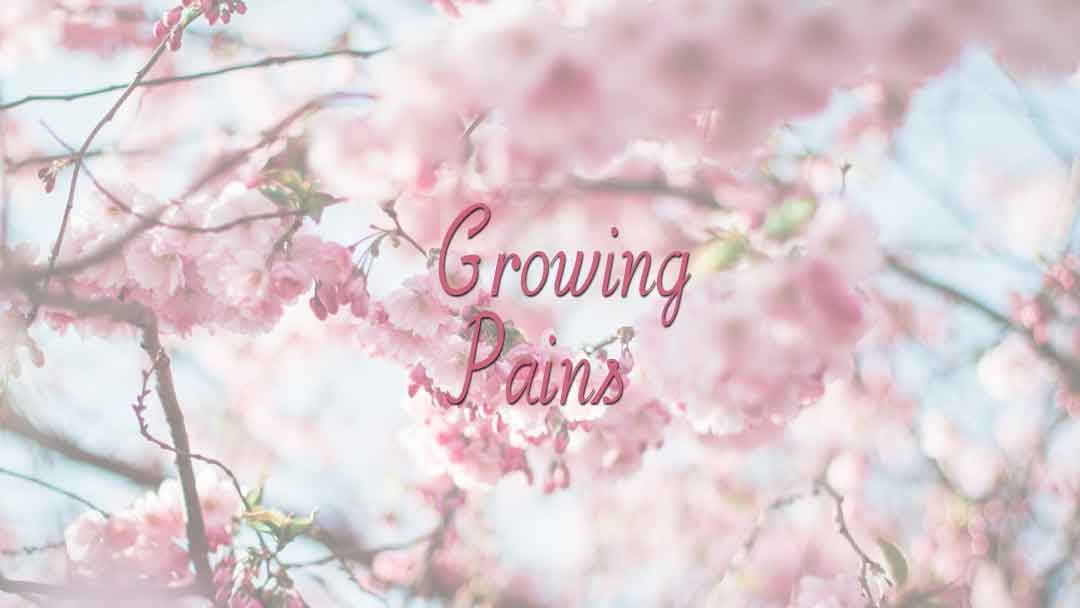 Growing pains have been on my mind the past few weeks because my granddaughter, Ayva, is suffering through them.  My heart hurts for her because I went through the same thing when I was her age and there’s not much secular doctors can do for it.  But I know our God is a miraculous healer!  As devoted athletes, as I was and she now is, you endure a lot of suffering for the sake of athletics, something you love doing.

As Christians, have you suffered growing pains?  Is there an overwhelming discomfort about you?  Do you feel like you are being stretched and pulled in multiple directions and/or multiple ways at the same time?  Do you feel at times like you are at your limits?  That’s God purging you, He’s carefully and systematically removing the “old” from your life.  He’s digging out a larger area in your life where your “new” can grow and see your promises come to pass.

When I think about how God is rewiring our hearts for what He has for us, it takes me back several years when my husband, Lonnie, had emergency triple by-pass surgery.  I remember rushing him to the emergency room, the long hours in the ER surrounded by close friends, waiting to hear test results.  The waiting through the next day for more tests and then hearing the words you never want to hear come from a doctor’s mouth, “We are amazed he’s still alive and worry he might not make it through the night for surgery tomorrow.”  What the doctor didn’t understand is we serve a mighty God who had greater plans for Lonnie and his heart.

I think back on it now and wonder as the surgeons were replacing (rewiring) the 3 arteries in his heart that were nearly completely blocked with an artery taken from his leg, God was starting to rewire his heart in a deeper, richer way.  The number 3 in the Bible represents “divine wholeness, completeness and perfection” and God was taking Lonnie’s heart over the next 3 years, gutting it out and filling it with His “divine wholeness, completeness and perfection”.  God needed to prepare Lonnie for a new season in his life where his heart would be capable of stewarding what God would pour out in his life.  As the rewiring of Lonnie’s heart was taking place, the thought patterns in his mind were changing.  God was burning off the “old” dross and replacing it with a greater capacity to love like He loves, changing Lonnie’s mindset and limitations.  God was opening a greater capacity within Lonnie to dream and see what God had for him in God’s kingdom for this new season.

It was last fall, during Rosh Hashanah when I was listening to a live feed from Jerusalem that Holy Spirit stirred up something in Lonnie that increased his territory and awakened the authority and power he had in Jesus Christ.  Lonnie was doing something on his computer in the office while I was streaming the live feed on my computer.  The ram’s horn was sounded, and it was like something froze Lonnie in what he was doing.  Then they sounded off the Yemenite and I could see the Spirit of God fall all over Lonnie.

For over 21 years I have watched Lonnie going through His growing pains with God.  My heart hurt to watch him going through it all, but I knew it wasn’t something I could do for him, all I could do was pray for him, encourage and edify him.  There were times Lonnie wanted to quit, he wanted to give up because all the growing pains hurt so deep.  I kept reminding him, “You can’t quit now.  God’s not through with you!  He’s got to empty you out (get rid of the old) so He can pour new and greater things into you!”  The sounding of those horns during the last Rosh Hashanah stirred up something God had for him that increased his territory with greater authority (power).  God must empty us of the “old” so we can be filled with His “new”!

In this new season God is stirring up and new and fresh hunger of desperation within his people to “grow”.  These growing pains are not from just lack, struggle, pain, financial strain, or even warfare, but lifestyles, generational curses and religion.  There’s a great shift happening in the atmosphere right now!    People and families are moving into a new spiritual realm where they are seeing less fighting amongst themselves and more seeking the presence of God.  They are pressing in to grow closer to God and have a closer, deeper relationship with Him.

Why are growing pains so painful?  Because through these painful times where our faith is stretched, the enemy loves to throw fear, anxiety, and doubt at our circumstances, our situations, our loved ones, and our surroundings.  This is the time when we need to be growing closer to God, mediating on His Word all day, and learning to REST in Him with EVERYTHING!  Take time each day before the sun rises to have time with God, immerse yourself in His presence, allow Him to do open heart surgery on you so He can download into your heart ALL HE HAS FOR YOU!  Let go of the “old” and allow Him to fill your heart with His “new”.  Allow Abba to highlight what He has for your life, pay attention to the visions and dreams He gives you.  Stand firm in the whole armor of God and go to war against those fears and claim the promises God has for you!