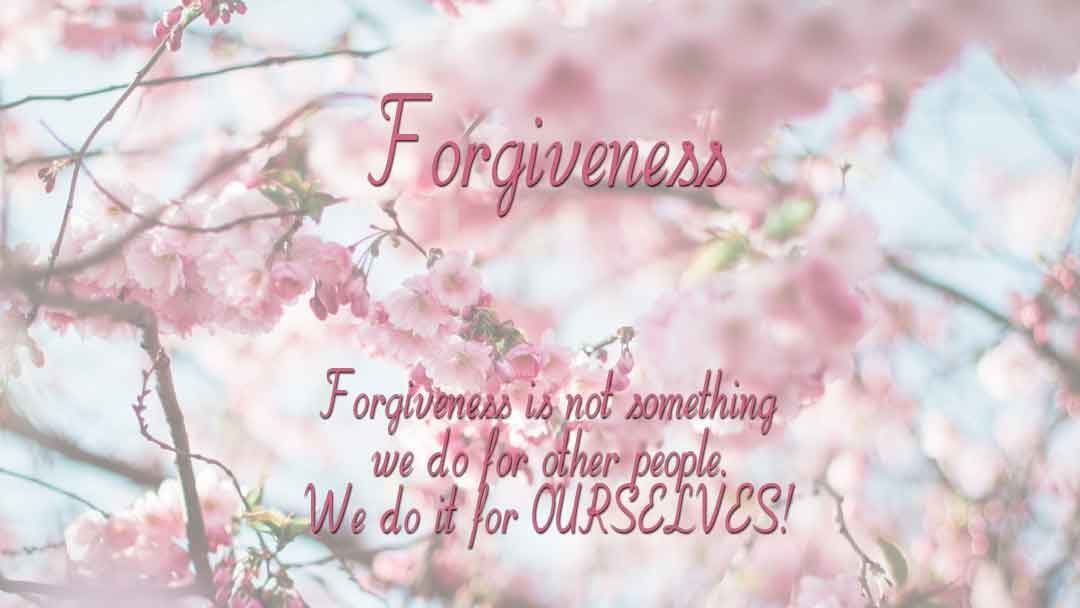 Do any of these comments sound familiar? Do they strike too close to home? It is not a “natural” thing for us to forgive. When we are hurt our self-defense kicks in and we don’t usually show an abundance of grace, understanding, mercy and forgiveness to those who have hurt us.

“12 Put on then, as God’s chosen ones, holy and beloved, compassionate hearts, kindness, humility, meekness, and patience, 13 bearing with one another and, if one has a complaint against another, forgiving each other; as the Lord has forgiven you, so you also must forgive.” Colossians 3:12-13 ESV

“Therefore, if anyone is in Christ, he is a new creation. The old has passed away; behold, the new has come.” 2 Corinthians 5:17 ESV

We all have past failures and choices we have made that we are ashamed of. We feel ashamed and guilty about them. Until we, as Christians, can fully accept and understand what Jesus did for us on the Cross, we will continue to hold this unforgiveness against ourselves. When we ask God to forgive us for something, we need to forgive ourselves for it and forget it. Isn’t that what God does when we ask him to forgive our sin? “As far as the east is from the west, So far has He removed our transgressions from us.” Psalm 103:12 NASB

“23 “For this reason the kingdom of heaven may be compared to a king who wished to settle accounts with his slaves. 24 When he had begun to settle them, one who owed him ten thousand talents was brought to him. 25 But since he did not have the means to repay, his lord commanded him to be sold, along with his wife and children and all that he had, and repayment to be made. 26 So the slave fell to the ground and prostrated himself before him, saying, ‘Have patience with me and I will repay you everything.’ 27 And the lord of that slave felt compassion and released him and forgave him the debt. 28 But that slave went out and found one of his fellow slaves who owed him a hundred denarii; and he seized him and began to choke him, saying, ‘Pay back what you owe.’ 29 So his fellow slave fell to the ground and began to plead with him, saying, ‘Have patience with me and I will repay you.’ 30 But he was unwilling and went and threw him in prison until he should pay back what was owed. 31 So when his fellow slaves saw what had happened, they were deeply grieved and came and reported to their lord all that had happened. 32 Then summoning him, his lord *said to him, ‘You wicked slave, I forgave you all that debt because you pleaded with me. 33 Should you not also have had mercy on your fellow slave, in the same way that I had mercy on you?’ 34 And his lord, moved with anger, handed him over to the torturers until he should repay all that was owed him. 35 My heavenly Father will also do the same to you, if each of you does not forgive his brother from your heart.” Matthew 18:23-35 NASB

I don’t know about others, but I do not want any unforgiveness on my part keeping God from forgiving me of my sins. Demonic spirits sit back and wait for us to open a door of unforgiveness. When we are unforgiving to ourselves and/or others, we are opening that door and allowing demonic spirits to enter in and feel us their lies.

“for this is My blood of the covenant, which is poured out for many for forgiveness of sins.” Matthew 26:28 NASB

Jesus died on the cross so our sins could be forgiven, so that they could be removed from us. Don’t let Satan sell you the lie that your sins are too great and could never be forgiven.

“ If we confess our sins, He is faithful and righteous to forgive us our sins and to cleanse us from all unrighteousness.” 1 John 1:9 NASB

Did you catch that in the verse above? “ALL”…God forgives our sins and cleanses us from ALL unrighteousness.

Now that we have discussed the importance of forgiving ourselves as God has forgiven us, let’s look back at Colossians 3:12 concerning “forgiving each other”.

“12 Put on then, as God’s chosen ones, holy and beloved, compassionate hearts, kindness, humility, meekness, and patience, 13 bearing with one another and, if one has a complaint against another, forgiving each other; as the Lord has forgiven you, so you also must forgive.” Colossians 3:12-13 ESV

For years I harbored unforgiveness toward so many people for so much hurt they had brought to my life. I was just miserable. As my husband says, “I finally got tired of drinking muddy water”. I was tired of being tired of it all. I opened my Bible one day and as I opened it I was pleading with God to show me how make my life better, how to live the life He wanted me to live. I started reciting The Lord’s Prayer found in Matthew 6:9-13 KJV, “9 After this manner therefore pray ye: Our Father which art in heaven, Hallowed be thy name. 10 Thy kingdom come, Thy will be done in earth, as it is in heaven. 11 Give us this day our daily bread. 12 And forgive us our debts, as we forgive our debtors. 13 And lead us not into temptation, but deliver us from evil: For thine is the kingdom, and the power, and the glory, for ever. Amen.”

As I was reciting The Lord’s Pray and got to verse 12 “And forgive us our debts, as we forgive our debtors” the light bulb turned on in my head! I finally understood that until I could forgive those who had forsaken (hurt) me, God could not forgive me of my debts (sins). What a revelation to have. What a victory to claim! It’s at that point that I broke down and cried out to God to teach me how to forgive not only myself, but how to forgive others. I have lost count over the years of people who have looked at me and said, “I can’t believe you forgave them”. It thrills me when they say this because I get to witness to them how God teaches us to forgive not only ourselves, but others. Then they get to experience the freedom from the bondage of unforgiveness as God had so wonderfully shown me how.

Out of obedience to God we learn to forgive by faith. We have to have faith in God that He will do the work in us we need for forgiveness to be complete. What I have learned through all this is once I learn to forgive then I learned to love them as God has taught us to love one another.